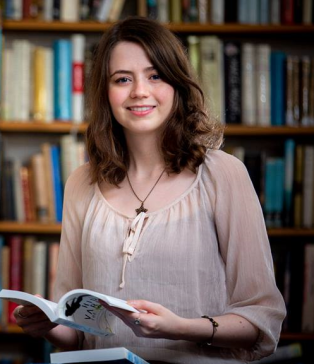 UK based, Caitlin Lynagh releases Lost Frequencies, the third book in her Soul Prophecies series in November and has recently reissued her first two books as a re-imagined deluxe single- edition, Another Path.

I caught up with Caitlin to ask her about her urban fantasy series, her future plans and her thoughts on life – and what comes after.

I enjoyed reading Anomaly and Hidden Variables. Another Path works so well as a single anthology. Why did you decide to release this edition?

When I began writing Anomaly I had a clear idea of where I wanted to go with the series. I wanted to write about Ahrl’s world and I wanted write about the birth of the next evolution of the soul, artificial intelligence. However, half way through writing Anomaly I realised that I needed to tell Sophia Leto’s backstory. It was something I couldn’t do within Anomaly as it would never have worked as a sub-plot. Thus Hidden Variables was written as a prequel.

Outlet Publishing offered me a deluxe edition of the two books and I realised I could modify the stories slightly to tie in with the later books now they are finished as well as tidy up some weaknesses in the original plot. I could also explain the science behind my ideas better so I decided to add pages from Sophia’s science journal.

The science aspect always fascinated me too. You’ve gone into a lot of detail and thought experimentation with Another Path. It feels like a credible explanation for the afterlife.

Thank you. That was what I was aiming for. After Anomaly was released, a science blog contacted me about my ideas and wrote an article about the book, which was trending on a sub-Reddit for a while. I’ve always been fascinated with science and like to ask questions about life and our existence. It’s always fun to theologise but even more so when you try to understand it all from a scientific perspective.

Yes, planet Iyeeka. It’s a story of how The Thirteen came together, millions of years before humans evolved and yet had knowledge about how the human civilisation, and indeed how the human soul would evolve and develop like their own. The mistakes they made on their planet were out of ignorance and lack of curiosity. Humans have choices that Iyeekans didn’t. They never realised how they were destroying their planet until their tipping point had been breached. I use the science ideas in Another Path to expand on how their great scientist, a prophet of their day, could see the future of mankind and help guide humans away from the mistakes made on Iyeeka. Thus helping continue their own continued existence.

It’s a clever premise. It almost sounds like a shift in genre compared to Another Path.

Yes, it’s more of a sci-fi fantasy than an urban fantasy but the themes still connect in similar ways. Each book in the series could be read as a stand-alone novel. I don’t think I’ll ever conform to one specific genre. I know I should, for shelf placement, but I don’t think I’ll stray too far from sci-fi fantasy. It will always probably be the centre of my creative Venn.

There’s a compelling supernatural undertone to Another Path, will this theme continue in the series?

Certainly with Lost Frequencies – it’s less of a ghostly spirit, more dream-based spirituality and intuition. The fourth book in the series, The Quantum Messenger, less so but then the same effect is gained in other ways.

Nope. All I will say is that consciousness is needed for an active sub-conscience…

It all sounds intriguing. Do you still find time to read with your busy writing schedule?

I try to. I don’t read as many books as I did when I ran my book review blog (The Book Igloo) and I read books with a different mind-set since learning more about the writing process. I still enjoy reading. I read a lot of classics last year, which are sometimes hard going. I’ve been reading more books that I’m drawn to so far this year.

Are there any books you’ve read that you wish you had written?

Maybe The Hobbit. It’s the perfect epic-fantasy, relentless pace and it’s so easy to become lost in the world and story. I would also say Warm Bodies by Isaac Marion because the premise was so different to the usual zombie book, being in the zombie’s viewpoint. It was simple but worked so well. It’s one of the few books I’ve re-read and still enjoyed as much.

You are active on social media. How important is it to engage with other writers and readers?

I enjoy engaging with readers and other writers but have to discipline myself. It’s easy to get distracted and waste hours. I also tend to use each platform differently. Facebook tends to be more for release information updates and sharing bookish memes, I tend to use Twitter for random thoughts and more general and personal interactions. I used to love Tumblr but it’s gone quiet now – though I’m still there. I’ve only recently started using Instagram, which I tend to use as a Bookstagram, very little self-promotion, even though I probably should use it more that way. I’m beginning to use Goodreads more lately too.

Thank you, Caitlin. Good luck with Another Path and future releases. You can buy Another Path on eBook or Paperback from Amazon or order from most good bookshops.

HERE ARE MY REVIEWS FOR Anomaly and Hidden Variables.

I will post about the whole series later this week so stay tuned!

Hi I'm Mellanie Ann Duque from the Philippines! I blog about books and other things that makes life blissful. I have a creepy obsession for Halloween and cats. here are some of my social media accounts: YOUTUBE: https://www.youtube.com/channel/UCRXod7ydPPhpTGdEVKo2kag INSTAGRAM: https://www.instagram.com/no.shelf.control/ FACEBOOKPAGE: https://www.facebook.com/noshelfcontrol/ View all posts by MellanieAnnDuque